KUALA LUMPUR, 21 February – The Malaysian Sharia Lawyers Association (PGSM) today called for the amendment of the Federal Constitution to give state governments the power to legislate to give Sharia courts the power to exercise judicial control.

Earlier today, a panel of nine Federal Court judges – including the Chief Justice and also Malaysia’s three senior judges – unanimously ruled that Section 66A of a state law Selangor was unconstitutional as the Selangor State Legislative Assembly did not have the power to make this law to give powers of judicial review to the Sharia courts.

Section 66A of the Administration of the Religion of Islam (Selangor State) Promulgation 2003 is the law of the State of Selangor which attempted to give the Sharia courts in Selangor the power to hear and decide on judicial reviews of decisions made by people such as the Islamic Religious Council of Selangor. (But) and the fatwa committee of Selangor.

This is what Section 66A – which was declared invalid today by the Federal Court – states: “The Sharia High Court may, in the interests of justice, on the application of any person, have jurisdiction to grant leave and to hear the application for judicial review of the decision taken by the Majlis or the committees exercising the functions provided for in this Act.”

Section 66A, however, does not make specific references to what these rulings would cover, for example whether it would involve fatwas issued by the Fatwas Committee of Selangor or Mais.

The Federal Court pointed out that it had already clarified in several other court cases that only the civil courts have the power to exercise judicial review, while pointing out that the Federal Constitution itself does not allow state legislatures to Legislate to give powers of judicial review to Sharia courts.

In a statement, PGSM Chairman Musa Awang today described the Federal Court ruling as one that Sharia courts do not have the power to conduct judicial reviews of fatwa (otherwise called religious opinions) issued by Islamic state authorities.

Musa then urged that the Federal Constitution be amended to eventually allow Sharia courts to exercise judicial control over decisions made by Islamic state bodies.

“PGSM urges the federal government to take a long-term approach to amending Item 1, List II (State List) of the Ninth Schedule to the Federal Constitution to empower the state government to have laws to empower the State Shariah Court to exercise powers of judicial review over all decisions made by the State Islamic Religious Council or committees that perform functions under the Shariah laws of state, including by state fatwa committees,” he said.

Musa insisted that Sharia courts should have powers of judicial review in relation to decisions made by state Islamic religious councils or state fatwa committees, arguing that courts of Sharia are the “proper and competent forum as it involves parties among those who are of the religion of Islam and revolves around hukum syarak”. The term “hukum syarakrefers to Islamic laws.

“In order to implement this amendment, PGSM urges the federal government to form a special committee to study and propose this amendment to the Federal Constitution,” he said.

Earlier in the day, however, the Federal Court had already explained that only the civil courts have the power to exercise judicial control, to determine whether laws are valid in conformity with the Federal Constitution and to determine, for example, whether decisions or the exercise of powers under public law (or the exercise of powers by public authorities or public bodies) for illegality or non-compliance with procedures.

The Federal Court also highlighted the difference between the making of a fatwa – or the procedures and laws to be followed in the process of making a fatwa – and the substantive content of the fatwa or what the fatwa actually says. .

The Federal Court clarified that it is always for the Sharia courts to decide the content of a fatwa and its interpretation insofar as these issues involve “hukum syarak” (Islamic law) or personal law and not on matters involving contradictions with a written law – federal law, state law or the Federal Constitution.

But when it comes to situations such as whether the conduct of a fatwa committee or a fatwa is procedurally consistent, the Federal Court said it would be up to the civil courts to decide.

In reviewing the powers granted under Section 7 of the Selangor Promulgation of 2003 to Mais, the Federal Court noted that Mais’s powers clearly went beyond what could be considered to imply Islamic doctrines or do part of Islamic Muslim law, but rather had quite clearly crossed public law and involving powers of public law.

Article 7 lists the duty of Mais to promote the economic and social development of the Muslims of Selangor, as well as his powers to carry out activities involving the development of commercial and industrial enterprises and to grant loans or to work with others for these purposes, to make investments, establish higher education loan programs for Muslims, establish and maintain Islamic schools and Islamic training and research institutes, and establish and operate foster homes for orphans . 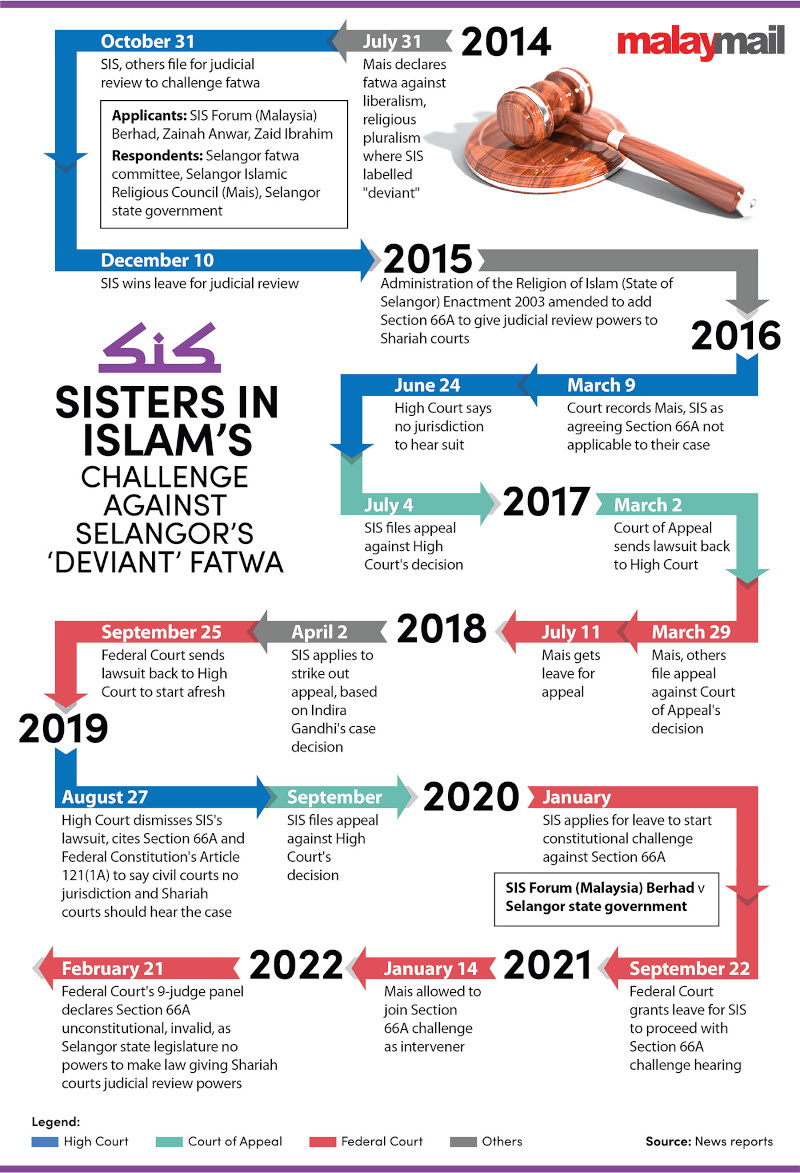