What the GAO found

The Consolidated Appropriations Act of 2022 appropriated $9.1 billion for 4,963 projects at the request of members of Congress. The law includes provisions designating amounts of funds for particular recipients, such as local governments and nonprofit organizations, to be used for specific projects. These provisions are called “Congressional Directed Spending” in the US Senate and “Community Project Funding” in the House of Representatives. Eighteen federal agencies received funding for these arrangements. Agencies are responsible for distributing these funds to designated recipients and tracking the funds.

Funds are directed to several broad purposes, or budget functions, as shown in the figure below. Budget functions are broad categories into which all federal expenditures are placed.

The named beneficiaries for about half (more than 2,300) of the approximately 5,000 projects are tribal, state, territorial or local governments. Beneficiaries of other projects are higher education and other non-profit organizations or the federal government. As part of the application process for these provisions, members could not apply for funds directly for for-profit entities. The projects are located in 47 states, four US territories and the District of Columbia (see figure below).

Breakdown of Funding Provided through Community Project Funding/Congression-Directed Spending Provisions in the Consolidated Appropriations Act of 2022, by Location 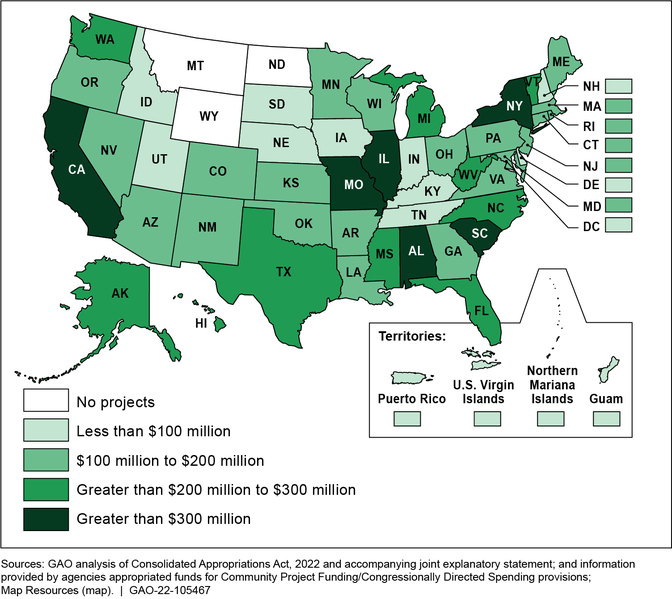 Note: The Community Project Funding/Congression Directed Spending provisions include several projects that will affect more than one state, such as water management projects along a river. Funding for these multi-state projects totals over $100 million and involves 31 states. Although no specific projects are located in Montana and Wyoming, two multi-state rural water projects have been identified as affecting these two states as well as five others.

The Consolidated Appropriations Act 2022 specifies a period of availability for each appropriation from which funds have been designated. For example, 68% of funds are available for agencies to commit to beneficiaries for a fixed period, ranging from 1 year to 5 years. After the funds availability period expires, agencies will generally have 5 years to fully disburse the funds. The remaining 32% of the funds are not time-limited, so the funds are available for obligation until spent. In some cases, the time frame agencies set for recipients to spend the funds may be shorter than specified in the law.

Why GAO Did This Study

During the appropriations process for fiscal year 2022, members of Congress may request funds for specific projects.

Congress established new requirements to help provide transparency around these requests. It also included a provision in the joint explanatory statement accompanying the Consolidated Appropriations Act of 2022, allowing GAO to review the agencies’ implementation of these provisions.

This report provides an overview of FY2022 Community Project Funding/Congression-mandated spending. Specifically, it provides information on (1) the agencies to which these funds have been directed; (2) purpose of funds, types of designated recipients and location of projects; and (3) the period of availability of these funds.

This report also includes information on the scope and methodology of GAO’s reviews of the 18 agencies’ plans to distribute and monitor these funds. These 18 agency-specific notices are available at https://www.gao.gov/tracking-funds.

GAO analyzed data from the Consolidated Appropriations Act of 2022 and the accompanying Joint Explanatory Statement to describe the agencies receiving funds and the purpose of the funds, and to provide information on designated recipients and projects. To develop the 18 agency-specific reports, GAO also interviewed agency officials using, among other things, a set of standardized questions.